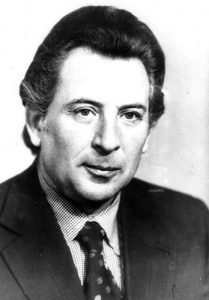 E.A. Kaner, a member of the Board of Editors since 1969, died on 25 July, 1986. His death is a great loss for the international solid state physics community and for physics in the USSR.

For almost two decades, the title page of this Journal bore the name of an outstanding theorist as a member of the Board of Editors, E.A. Kaner. Today the physical sciences, and all of us suffer a severe bereavement that Professor Kaner is not among us any more. Attacked by a sudden grave illness, he died 25 July, 1986 at the age of only 54 years. He passed away while in his hey-day, full of creative force and new ideas, leaving undone much of the research conceive.
Professor E.A. Kaner was a person of remarkable human qualities, a scientist selflessly devoted to physics, brave in judgements and deeds. He possessed an unusual clarity of mind and generosity of heart. His constant search for novelty and great scientific potential directed him towards the most challenging of problems. Many research areas that were a number of effects bear his name.
E.A. Kaner became known to the scientific community in the mid 1950’s when he and M. Azbel predicted the cyclotron resonance of electrons in metals. This highly interesting effect is known in the world literature as Azbel-Kaner Cyclotron Resonance. It marked an era of high frequency studies of metals in a magnetic field. The Azbel-Kaner CR quickly became an efficient technique for the study of electron Fermi surfaces. By now it has been observed and investigated in more then three dozen metals, and the number of papers on the subject counts in the hundreds. The resonance is described in all serious monographs and texts on the solid state, and even in popular science books.
Certainly it is not an exaggeration that the discovery of the Azbel–Kaner CR had an impact on the whole of solid state physics.
Also generally recognized are the results obtained by E.A. Kaner in the theory of plasma effects in metals. As a result of his studies (most of them in cooperation with Prof. V.G. Skobov), the traditional view of metals, as substances that are absolutely opaque to radiofrequency electromagnetic waves, has been revised. Professor Kaner predicted new types of radiowaves capable of propagating through metals. He discovered a fundamental cooperative property of degenerate electron plasmas in magnetic field, namely collisionless damping that he named “magnetic Landau damping”. The ensemble of results concerning electromagnetic waves in metals was included in the brilliant monograph by E.A. Kaner and V.G. Skobov “Electromagnetic Waves in Metals in a Magnetic Field”, that has had two editions in the United Kingdom.
The papers by E.A. Kaner on the single-particle (ballistic) mechanism for the anomalous metal transparency have became classic. Here belong the theoretical prediction and analysis of the effects involving the modes of trajectory-controlled radiofrequency electromagnetic wave penetration into a metal. They are known as the Gantmacher-Kaner modes (Prof. V. Gantmacher was the first to observe them experimentally). Among other fundamental physical results are those obtained by E.A. Kaner on magnetic acoustical effects in metals. He predicted the acoustic cyclotron resonance, the open-trajectory resonance and the helicon-phonon resonance. All of these effects have been discovered experimentally. He suggested a theoretical foundation for the Rayleigh wave magnetic acousto-electronic effect in metals. His pioneering results on strong non-adiabatic electron-phonon interaction should also be noted here. During recent years, E.A. Kaner has resolved the complex problem of electron-phonon interaction and spatial dispersion of conductivity in one-dimensional conductors. He spent also much effort on study of nonlinear electro-magnetic effects in metals and semiconductors. He worked constantly and ardently till his last days. Even this brief list of the scientific achievements of E.A. Kaner demonstrates how brightly talented he was.
E.A. Kaner was a correspondent-member of the Ukranian Academy of Sciences. He was associated with two institutions, the Institute of Radiophysics and Electronics, Academy of Sciences of the Ukranian SSR, where he headed the Department of Solid State Theory, and the University of Kharkov in which he was Professor of Theoretical Physics. As a member of Editorial Policy Committee of Solid State Communication almost from its inception, Prof. E.A. Kaner helped to determine the scientific scope of the Journal and its editorial policy. He was especially good as an editor because of his unique ensemble of qualities, such as encyclopedic erudition, brilliant memory, masterful command of the mathematical formalism of physics, and benevolence in human contacts, united very naturally with uncompromising criticism.

V.M. Agranovich, Moscow,
Member of Board of Editors of Solid State Communication.

Emanuil Aisikovich Kaner died much too early; he was just 54 years old when his life, which had been so creative, ended abruptly. Monya was tall, heavy built, handsome, with a kind and somewhat childish smile – and very gifted in chess and physics. He entered the Kharkov University (the first teaching place of the famous Landau and the cradle of Landau’s School of Theoretical Physics) in 1949, the last Stalin Year in which Jews were admitted to physics. He listened to the lectures of physicists I. Lifschitz and A. Akhieser, and mathematicians N. Akhieser, A. Levin and A. Povzner. He befriended A. Voronel, V. Kontorovich and M. Azbel. He graduated the University with flying colors in 1954, and married his University friend, Irina Fugol’ (also a talented physicist) a year after Stalin died. Despite his outstanding thesis, he was not accepted for a position at any university or scientific institute, until 1955 when he joined the Institute for Radiophysics and Electronics of the Ukranian Academy of Sciences. In that same year Kaner (with Azbel) predicted cyclotron resonance in metals. Later in collaboration with Skobov, he formulated the theory of non-dissipative electromagnetic waves in metals, and worked on the quantum theory of ultrasonic propagation. His creativity and hard work continued to be enormous throughout his life. Although he is no longer with us, his tremendous impact on science remain as a living testimony.